We’re going to show you how we rebuilt the water damaged overhead cab the first time, and how we did it way better the second time. When we first bought our RV, one of the biggest jobs we had to do in the remodel was to fix the major water damage that was in the overhead cab. Not only is this common in Class Cs, but it can also be difficult to maintain. We went through the (tough) process of ripping it all out and rebuilding it, which lasted for almost two years with no problems until we dropped the ball on the very wet Oregon Coast while we were spending the winter there. We had been resealing the outside seams, but not enough and moisture inevitably found it’s way in. For that climate, we also should have been using a dehumidifier. Although, much props to how much the activated charcoal bags we keep around the rig and the mattress infused with charcoal saved so much.

Fortunately, this was a fairly easy do-it-yourself fix.

A lot of the reason that it would be so much easier than the first time was because we thankfully left everything loose in the first rebuild of the cab so that it wasn’t nearly as hard of a job as it was before to take everything out. We were so glad we did this! After thanking our past selves profusely, we got to work on the second rebuild, which we made much more resilient than the first one. Between using cedar planks rather than plywood (which is way more resistant to mold and water), using “KILZ” on every side of the material beneath it, and making the outside seals way stronger, we’re thinking this one will be pretty hard to destroy. Whether you’re dealing with water damage in an RV, a boat or in your home, we hope you find this helpful! 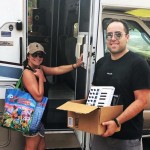